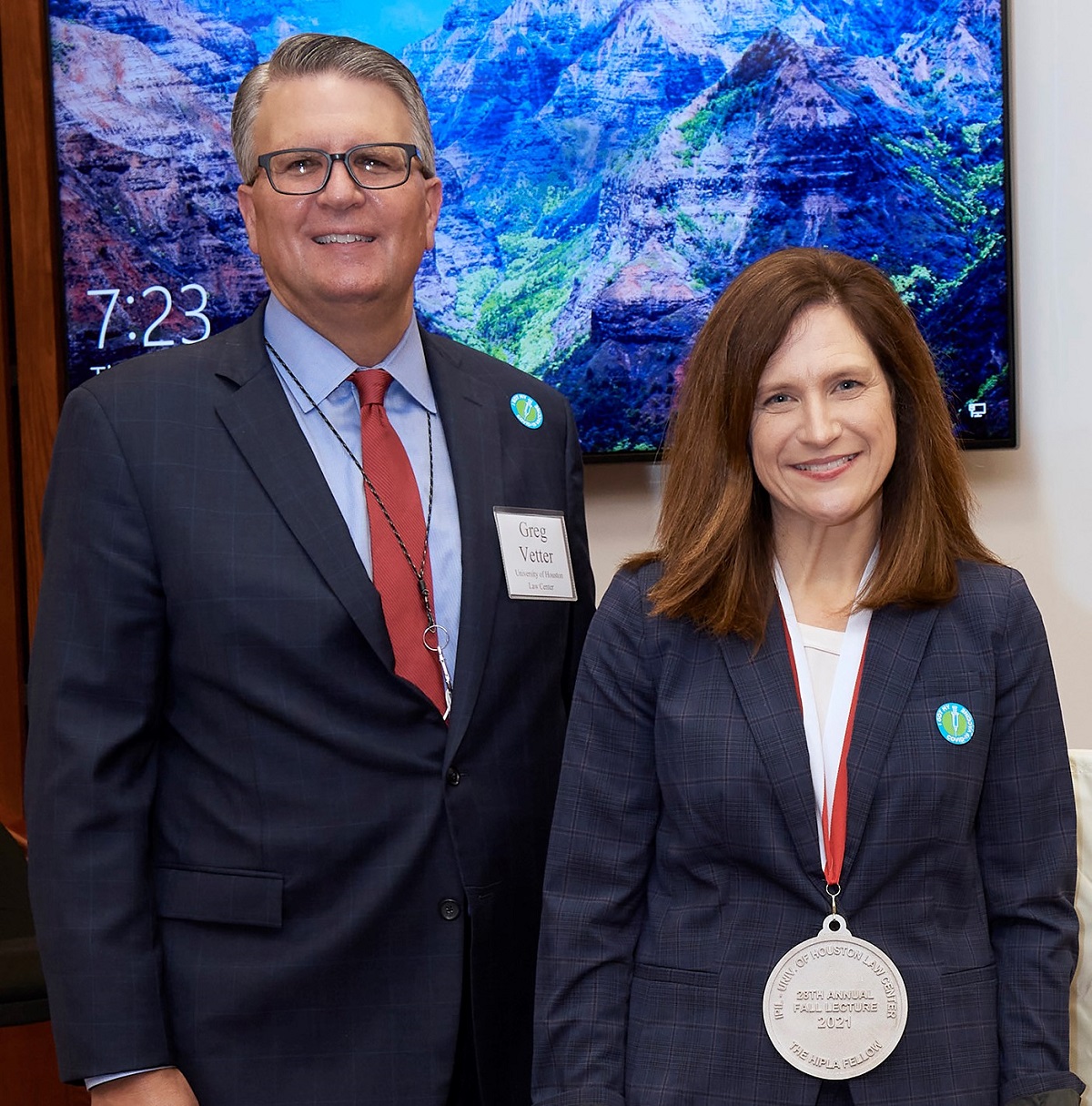 Rinehart––William J. Maier, Jr. Dean and Professor of Law at West Virginia University College of Law––teaches and writes in the area of patent law, specifically commercialization. The topic Rinehart presented at the fall lecture is part of a long-term project that was sparked, in part, while she was studying the invention of the radio, she said.

While conducting her own research, Rinehart said she found herself asking a lot of questions about “who owns some of this technology,” particularly in cases where there were multiple inventors with different employers, like the federal government or a private corporation.

During Rinehart’s tenure at the University of Utah S.J. Quinney College of Law, where she served as a professor of law and associate dean for academic affairs, she said she spoke with a researcher developing a prosthetic implant for veterans at the local Veterans Affairs hospital. The researcher worked on a team with members from both the Department of Veterans Affairs and the university.

When Rinehart asked the researcher who owned the invention, he said he didn’t know.

“That was a little bit interesting,” Rinehart said. “I started doing a little bit of research and stumbled into a set of congressional hearings involving the Hepatitis C drug Sovaldi, which was developed by a VA researcher who’s affiliated with Emory University. There was a great deal of litigation involved in who might own that technology.”

The drug, which was shown to cure Hepatitis C, was developed in a lab owned by the researcher while he was employed by Emory University and the VA Medical Center in Atlanta, according to previous reporting by Military.com.

The lab, and the drug, were later sold to a biopharmaceutical company for $11 billion, Rinehart said, and now the VA must pay about “$40,000 per treatment for each veteran that gets that treatment.”

“The congressional hearings raised a lot of questions about how this could’ve happened. How could an invention developed at the VA be something now that the VA system has to pay out for? And the answer, obviously, is patents and complicated ownership mechanisms for these inventions where they’re developed in multiple ways,” Rinehart said.

“It’s not just complex, it’s multiplex,” she said. “I like to use the word multiplex because of all these different layers of incentives, ownership questions, and legal and business questions,” she said.

When it comes to questions about invention disclosures, Rinehart said it was important to understand each individual’s “motivation lane,” particularly because each person may have their own motivations that may not be apparent based on the facts of the case.

For instance, the researcher who worked on the prosthetic said his motivation boiled down to a single conversation.

One of the veterans in the early stages of the prosthetic development told the researcher that his goal was “just to take an evening walk with [his] wife every night,” Rinehart recalled.

Months after the clinical trial was developed and the patient was allowed to participate, he told the researcher in his follow-up appointment, “You achieved my goal. I now take a walk with my wife after dinner every night,” Rinehart recalled.

“The researcher who’s telling me this story was tearing up, and as I’m re-telling it, I’m tearing up too,” Rinehart said.

“Everyone in HIPLA, everyone in the local bar who supports IPIL [the Institute for Intellectual Property & Information Law], can really take pride because the reason the Law Center has a top ten ranked IP program is because of all of you and your support of the school,” Vetter said.

Back to News Homepage